Portugal and Spain are close cousins for their playful climate year round, fascinating heritage, fabulous dining and thrilling golf. However, when the comparison comes to matters of style, the Portuguese will tutor you in the art of relaxation while the Spanish are more inclined to celebration

In Portugal, Lisbon and the Algarve are first and foremost. One of the world’s great capitals, centuries older than London, Paris or Rome, Lisbon is one of Europe’s most beloved cites. You’ll find a web of cobblestone streets, ancient ... Read More.

trolleys, boutique shops and museums, one of which, the Museu Nacional do Azulejo, is dedicated to the hand-painted tiles (azulejo) the Iberian Peninsula is famous for. The Moorish São Jorge Castle with medieval origins commands a hilltop overlooking the historic city center. Lisbon's trademark seven hills are scattered about offering postcard views and sangria from their miradouros (terraces). The golf you want is Oitavos Dunes in Cascais (kush-kaish), a world 100 club about forty five minutes west of city center. Penha Longa is a Robert Trent Jones Jr. design nearby in Sintra, opened in 1992, and two time host of the Portuguese Open. An hour north on Portugal’s Silver Coast, is exceptional Praia D'El Rey, a Cabell B. Robinson layout and one of the most picturesque in Europe set beside the Atlantic as it plays through a pine forest and undulating dunes. If you have time, and conditions are right, drive 35 miles further north to Nazaré where you can see crazy people surf some of the most insanely big waves imaginable.

Two and a half scenic hours south of Lisbon is the Algarve, a rectangle of land at the bottom of Portugal facing the Atlantic west and south with Spain on the east. It is a place about verandas perched high on reddish, sandstone cliffs overlooking the sea. It is home to peace, quite and Marinha Beach, considered by the Michelin Guide as one of the 10 most beautiful beaches in Europe. There are 8-10 choices for excellent golf beginning with Quinta do Lago, a luxury resort near Faro that opened in the early 1970s. The excellent South Course is an eight time host to the Portuguese Open. The remodeled North Course was named ‘Best New Golf Course in Europe’ at the 2014 World Golf Awards. Nearby San Lorenzo is considered the leading club in Portugal and among the top 15 resorts in continental Europe. Frank Pennink's Vilamoura Old Course is reminiscent of the classic, wooded, inland layouts of Britain. The Monte Rei North Course is a Jack Nicklaus signature club set in over 1,000 acres of unspoiled countryside near the border with Spain between the dramatic Serra do Caldeirão mountains and the Atlantic Ocean.

If you have enough time, 10-12 days, thinking about a land cruise combo. Portugal and Spain pair very well. Only two hours east on an interstate style highway is Seville where you’ll want to stop for lunch (tapas and gazpacho soup) if not to play Real Club de Golf de Sevilla (Royal Seville Golf Club) and spend the night. Royal Sevilla is a José María Olazábal design that hosted the 2004 World Golf Championship plus the Spanish Open in 2008 and 2010. Due south in about two more hours is the heart of Spanish golf – the Andalusia region and the southern reaches of the Costa del Sol where you’ll find San Roque and Sotogrande. (Half way to the coast is yet another opportunity to smell the roses, this time in Jerez, another fascinating ancient city famous for its sherry production along with the “Real Escuela Andaluza de Arte Ecuestre”, a school of equestrian skills. Try to be here on a Thursday so you can witness the schools’ fully fledged equestrian ballet. Its off the charts.) Eventually when you get to the Mediterranean coast you’ll find a one of the most concentrated collections of fine courses available anywhere in the world. Cabell B. Robinson is well represented with Santana, La Reserva and one of his most impressive projects at Finca Cortesin, home to the World Match Play Championship in 2008, 2011 and 2012. It is Robert Trent Jones Sr however who wears the crown with Sotogrande Old, Las Brisas and mighty Valderrama. Royal Sotogrande was RTJs first European course opened in 1964. It’s a masterpiece which continues to remain relevant after all this time while measuring less than 6,900 yards. The course underwent a massive restoration and modernization in 2015/2016. Greens, tees and fairways were totally reconstructed, sub air was installed, this is a course for the ages. Las Brisas opened four years later and it was more of the same made even better by the face lift RTJ disciple Kyle Phillips (Kingsbarns, Penha Longa) gave it in 2014. Jones needed a mulligan at Valderrama to make it the world class, world 100 classic it is today. His first version opened in 1975 but didn’t move the needle. He was called back in 1985 by the club’s new billionaire owner Jaime Ortiz-Patiño who had a grand vision that turned into Europe’s #1 club since 1988 and hosted the 1997 Ryder Cup. There are strict handicap limits at Valderrama: ladies 30, men 24.

Spain's Costa del Sol is a 100 mile beach party which is raucous and warm in the summer but absolutely perfect in our view during the spring and fall. Guaranteed weather, beautiful golf courses, first class resorts and sizzling nightlife are well known to Europe’s jet set. Marbella boasts shops and restaurants to rival London or Paris, as well as an exclusive harbour and marina - Puerto Banus. This is spirited experience year round but it peaks at fiesta time. Plan your golf to include Ronda's Pedro Romero Fair, a 100-year-old fiesta highlighted by the Goyesque Bullfight. Also in September is Almáchar's Ajoblanco Fair, celebrated in honor of the muscatel grape harvest. July's Nerja Cave Festival is one of the most prestigious dates for international music and dance. 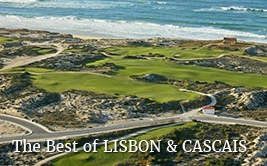 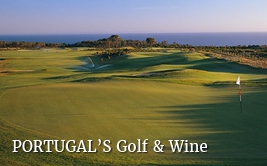 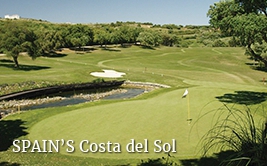 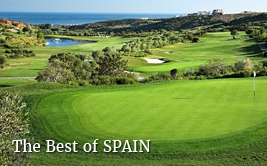