The land Down Under is home to kangaroos, kookaburras and koalas; the Great Barrier Reef and Ayres Rock; Sydney, Melbourne and Tasmania. It is also convincingly among the world’s top five international golf destinations along with Scotland, Ireland, England and Spain.

Twenty minutes south of Melbourne, Australia’s second largest and most vivacious city, is the renowned Sandbelt with more than twenty clubs. At least seven are exceptional. The sandy soil makes for firm, fast conditions characteristic of a ... Read More.

traditional links layout differing however with the greens. Green speeds here are routinely lightning fast. Bunkering ranges from gloriously shaggy to razor sharp and deep. Waste areas abound. It is here where Dr. Alister MacKenzie turned in some of his finest work at Royal Melbourne and Kingston Heath. Royal Melbourne is a regular among the world’s top 15; Kingston Health is steady among the top 30. Like Royal Melbourne, Metropolitan was founded in 1891 but it was in 1908 that the club we play today was founded on scrub farmland that was transformed into a layout that would eventually challenge the best players in the game. Australia’s great Peter Thomson (5 time Open champion) began his brilliant career here with a win in the 1951. Lee Westwood defeated Greg Norman in the 1997 Australia Open. Commonwealth's origins can be traced to 1914. The clubs here go to great lengths to create and maintain their spaces without grass. At Commonwealth, you’ll enjoy seeing some of the finest Australian bush trees in all of Victoria. Across the street from Royal Melbourne is Victoria, another of the country’s top 10 clubs in the area. It opened in 1927 after Dr. Alister MacKenzie added exquisite bunkering to an already exception layout.

Tasmania is next, a seventy minute flight from Melbourne but now there is a stop to make in the middle of the Bass Strait. This is home to Cape Wickham and Ocean Dunes. If you like stunning golf in remote settings by the sea, like Bandon and Cabot, you will treasure King Island. Cape Wickham opened in 2015 with an instantaneous top 25 world ranking. It is a remarkable course with eight holes hugging a crazy rugged coastline, but of course it has to be. It’s on the northern tip of King Island, Tasmania. Ocean Dunes opened in 2016 with similarly serious resources and the same mandate: reward the site and those who visit with a golf course worthy of both. See for yourself on Google Earth.

Now on to Tasmania where Tom Doak’s and Michael Clayton’s Barnbougle Dunes has been a world top 50 since it opened in 2004. Ever the naturalist, the route follows wherever the 100 foot dunes lead and of course along the shore. This is a classic true links layout represented with three holes Doak counts among his all-time top 24– 4, 7 and 13. Next door is Barnbougle Lost Farm by Coore & Crenshaw that opened in 2010 and is a comfortable regular among the top half of the world 100. Bill Coore who isn’t known for hyperbole says, “I've never seen two landforms so completely different on contiguous courses. The existing course plays like a classic seaside links, with holes nestled down in the dunes, on a small property. Our site is shaped like a square doughnut and has huge perimeter dunes. Inside the doughnut hole is rumpled terrain, like at St. Andrews." It’s interesting to read deeper detail about these courses to how the designers are so obviously thrilled to have had such an opportunity.

Finally in Sydney, you will play the great New South Wales designed by Dr. MacKenzie during his unimaginably productive 1926 visit that included Royal Melbourne, Kingston Heath and Victoria. The course overlooks Botany Bay where Captain James Cook landed in 1770. No. 6 is a famous par 3 with most of its 195 yards played over the Pacific with a left to right “breeze”. That sounds good since land is right but it can require you to aim well out over the ocean which is somewhat disconcerting. It’s funny how with all that water and wind, the playing tip on their website cautions you about avoiding the greenside bunkers! The Lakes is located 15 minutes from the CBD and within 5 from SYD Airport. It’s a top 20 here and a familiar host to the Australian Open, coming up again in 2018 but most recently from 2010 to 2012 including Tiger’s participation in 2011. Eleven of the 18 holes feature water, most of which comes into play on the inward nine. 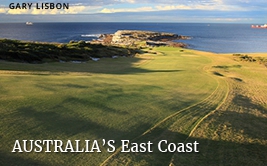 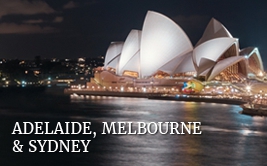 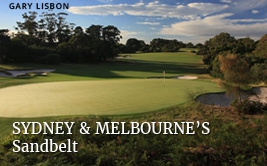 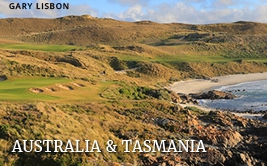 We are pleased here to feature our current collection of Golf Cruises and/or Escorted Tours for this destination.  These vacations are designed for golf couples who enjoy combining  experiences like luxury cruising and safaris to wine tasting and sightseeing with some of the best golf in the game.  Schedules are offered throughout the year and around the world.  The entire portfolio of more than two dozen itineraries is  available for review at 2022 / 2023 / 2024 Tours & Cruises.

CUSTOM TOURS
Custom golf tours are available which you can price entirely online using our exclusive online trip calculator at QUICK QUOTES℠ Of course, we always welcome the opportunity to assist you personally at 800.344.5257 or Expert@PerryGolf.com.