We’re three weeks away from the Ryder Cup, the biennial competition between the United States and Europe. The U.S. leads the all-time series 26-13 and holds the Cup after winning in convincing fashion at Hazeltine in 2016.

We’re counting down the days until the opening tee shot, no doubt.

Recent history, however, favors Europe, which has won the last five matches held on its home soil. The U.S. last won in Europe, in 1993, at The Belfry when Justin Thomas and Jordan Spieth were less than a year old.

Le Golf National is the host course for the matches, which head to France for the first time.

PerryGolf is thrilled to offer a fully managed Escorted Tour to Southwest France in September, 2019. Guests will enjoy five rounds and four wine tastings during this 11-Night journey through the Bordeaux and Biarritz regions. While France might not be the first destination that comes to mind when planning a golf trip, the presence of this year’s Ryder Cup proves the country is rapidly growing in appeal and opportunity. Medoc Les Chateaux is a terrific links inspired design offered on this Escorted Tour while Saint Emilion is a recent addition, yet another polished gem from the creative genius of Tom Doak (Barnbougle Dunes, Cape Kidnappers).

As it pertains to the upcoming Ryder Cup matches, he 12-man roster for each team is rounding into shape. Both teams are stacked. Anticipation always surges in the days prior to the Ryder Cup, still expert analysts feel these could be some of the best matches ever. Earlier this week, NBC Sports golf analyst Mark Rolfing told Sirius XM PGA Tour radio hosts Brian Katrek and John Maginnes that the 2016 Ryder Cup was the greatest sporting event he’s ever covered or attended, including several Super Bowls and other major spectacles around the globe. No one would be surprised if these evenly matched teams in 2018 surpass that lofty mark.

U.S. captain Jim Furyk made three of his four picks Tuesday afternoon and there were no surprises as he selected Ryder Cup rookie Bryson DeChambeau, winner of consecutive FedEx Cup Playoffs events, and wily veterans Phil Mickelson and Tiger Woods. The American legends have combined to appear in 18 Ryder Cups, participating in 78 matches.

Poulter has played well over the last year and has a phenomenal Ryder Cup record, including victories in 12 of 18 matches and a perfect singles record. Garcia has struggled this season but is on the record calling the Ryder Cup his favorite event. He’s claimed 22 points in eight appearances during which he’s been on the winning side five times.

Furyk has one final selection to make after this week’s BMW Championship at Aronimink, outside Philadelphia. While the soon-to-be 29-year-old bomber Tony Finau appears to be the leading candidate, Kevin Kisner, Xander Schauffele or Brandt Snedeker could play their way into consideration with a victory this weekend.

Of course, the Ryder Cup has been contested throughout Europe over the last decade as the European Tour has shown the wisdom and foresight to expose an array of nations to the exciting matches in an effort to enhance interest and grow the game.

PerryGolf can take you and your favorite golfing partners to walk the same fairways and greens where matches have been decided, cups won and champagne-soaked celebrations spilled deep into the night.

Our 2019 British Isles Golf Cruise includes attendance to the final round of The 148th Open at Royal Portrush, and also a round at the K Club Palmer Course, site of Team Europe’s Ryder Cup victory in 2006. The Gleneagles PGA Centenary Course, which played host to Europe’s convincing 16.5 to 11.5 romp in 2014 is a popular selection on any of our Custom Tours to Scotland.

The dramatic finish at Valderrama was the ideal setting for the 1997 Ryder Cup when the late Seve Ballesteros captained Team Europe to victory over an American squad that included a rookie named Tiger Woods. Perhaps no golfer is more synonymous with the Ryder Cup than the fiery Spaniard. His presence, when the team expanded to include all of continental Europe in the late 1970s, helped elevate the matches to the worldwide status they enjoy today. Ballesteros and fellow countryman Jose Maria Olazabal, known as the Spanish Armada, breezed to an 11-2 record in their fourball and foursomes matches. Valderrama is a staple on PerryGolf’s many Cruises to the region, including the 13-Night Spain, Portugal & France Golf Cruise in late May / early June 2020. 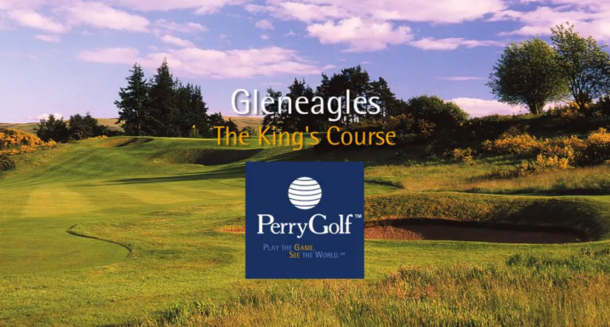 
The Ryder Cup 2014 is approaching and we can’t wait! In this article you’ll find information about the 2014 Ryder Cup, including dates, location, captains, VIDEOS, and much more. Enjoy! END_OF_DOCUMENT_TOKEN_TO_BE_REPLACED

Scottish media have reported recently on the significant impact the Ryder Cup at Gleneagles will have on the Scottish economy. While I am generally cynical of government produced figures which are often skewed for political purposes, I can speak knowledgeably about the impact of golf travel to Scotland for 2014.

END_OF_DOCUMENT_TOKEN_TO_BE_REPLACED

Lonely Planet’s Best in Travel 2014 contributor Tom Hall said: “Next year Scotland will be well-deservedly taking the spotlight on the world stage…The country’s buzzing cities and stunning scenery have plenty to offer visitors, combined with an incredible calendar of events and Scotland looks set for a year-long celebration.”
END_OF_DOCUMENT_TOKEN_TO_BE_REPLACED