The climate is temperate. The vistas are spectacular. There are beautiful beaches and dense jungles. Ruins of ancient civilizations pique the curious not far from the bustle of the world’s largest cities.

Scattered across South America are an array of activities, from entertainment late in the evening, to diverse, eclectic, world-renowned cuisine. Historical artifacts, abundant wildlife, mountain peaks and crystal coasts enchant, awaiting around every corner or turn in the road.

You may tango, of course and why would you not, if presented the opportunity?

PerryGolf, industry leader in global golf travel, continues to expand its South American portfolio, offering a trio of Cruises and Escorted Tours in 2020 to satisfy every desire in this popular, growing destination. January or November, ship or land, couples or singles, explore the Southern Hemisphere, savoring soothing temperatures and gentle breezes, enjoying a fixed itinerary that includes golf, culture, sightseeing, history and ample time to relax.

Golfers indulge on courses new and old, testing their swings and enjoying the camaraderie. These courses come in many forms, designed by an eclectic mixture of architects. On one hand is Gil Hanse’s Olympic Golf Course near Rio, designed specifically for the game’s return to the 2016 Olympics. Then, there’s Granadilla Golf Club, a tidy layout designed by English businessmen in the 19th century in the idyllic getaway of Valparaiso on the Chilean shore. Robert Von Hagge’s Buenos Aires Golf Club, on the other hand, took the professional golf spotlight in 2000 when the dynamic duo of Tiger Woods and David Duval secured the World Cup for the United States. Regardless, the venue, the golf courses in South America pose a certain challenge along immaculate landscapes against backdrops rugged and stunning.

Book by Oct. 31, 2019 and double upgrade your stateroom on the 690-guest Azamara Quest, a nimble, mid-sized luxury vessel offering all the amenities one could want at sea or in port – fine dining, live entertainment and a country club style atmosphere. The Azamara experience is built on four key pillars: destination immersion, extraordinary service, fine cuisine and wine, and wellness and vitality.

Rio de Janeiro is a sizzling destination spanning from Copacabana (Beach) to Corcovado (Mountain), whose permanent resident is the iconic Christ The Redeemer, a 125-foot statue built as a symbol of Brazilian Christianity nestled inside the Tijuca National Forest.

First suggested in 1850, the concept for the massive statue was finalized in 1920. Construction began in 1922 and was completed in 1931, paid for entirely by Brazil’s Catholic Church. Crafted from reinforced concrete and sandstone, the statue is 98-feet high and the arms are 92-feet wide, perched atop a 26-foot platform.

Buenos Aires, described by travel aficionados as the ‘Paris of South America’, is the largest city and capital of Argentina, sporting nearly 3 million residents. Known for its beefy steaks, luscious malbec wines and vibrant nightlife, Buenos Aires combines old school European style with modern Latin energy. San Telmo’s Plaza Dorrego is the regular Sunday night site for a “milonga” for those wanting to watch the tango in the street.

Machu Picchu is a unforgettable destination made even more appealing by the enjoyable ride to get there on the Hiram Bingham Train, where you’ll travel forward on the rails but feel as if you’ve walked into a snapshot from a previous era. The train is elegant and rich in charm, with its wood-paneled interiors and brass fixtures, delivering a experience from the days of luxury travel aboard parlour cars, providing a smooth ride to the enchanting ruins.

Fly fishing in Patagonia, Late nights in Sao Paulo, snowcapped views in Santiago – South America has much, much more to offer.

Traveling with your spouse creates an opportunity to recharge and reconnect, while sharing lifetime memories visiting interesting locations that are rich with history, beauty and fantastic golf. PerryGolf recommends these three destinations for adventurous couples who enjoy spending time traveling, chasing birdies and basking in the wonders of the world.

Take delight in the finest ports throughout Portugal and Spain on the 690-guest Azamara Quest, featuring 8 Nights and 5 Rounds of golf.

Enjoy the antics of the cute Barbary apes near the Rock of Gibraltar. These lovable primates are the only wild monkeys in Continental Europe.

Savor the majesty of Barcelona, with its ideal blend of food, scenery and nightlife. The second-largest city in Spain is one of the most frequently visited destinations in the world and was the host of the 1992 Summer Olympics.

Tour the gothic cathedral in Valencia, and savor Oceanogràfic inside the City of Arts and Sciences, which is one of the 12 Treasures of Spain

Equally unforgettable is the beautiful port city of Malaga and its glorious renaissance cathedral, which was built between 1528 and 1782 and whose interior includes both the renaissance and baroque styles.

Walk in the footsteps of golf’s legends during a round at Valderrama, considered the top ranked course in continental Europe and site of the Andalucia Valderrama Masters, won this year by tournament host Sergio Garcia.

Finca Cortesin, which played host to the Volvo World Match Play Championship on three occasions, is a divine Cabell B. Robinson design routed through a dramatic valley located near the Mediterranean. It’s routinely ranked as one of the top courses in Spain.

When it comes to romance, history and gastronomic delight, Italy is difficult to beat.

Enjoy the Roman Edifices while touring the city of Verona, which served as the setting for three Shakespeare plays, including Romeo and Juliet as well as The Taming of the Shrew.

Perhaps glimpse a celebrity while taking a moonlit stroll on the banks of Lake Como.

The Marriott Venice Resort & Spa is known across Europe for the most luxurious accommodations. Nights spent there are relaxing and divine.

And, of course, there are terrific golf options.

Also located only 10 miles from Rome is the delightful championship layout Marco Simone, which is the site of 2022 Ryder Cup. Saint Peter’s Dome is within view from several holes on this Jim Fazio design which unfolds on the grounds of an 11th century castle.

Venice Golf Club basks in a spectacular setting between the Adriatic Sea and Lagoon of Venice and features distinct links characteristics and the ever present bora and sirocco winds. Great champions from Palmer to Jacklin to Trevino have battled this formidable foe.

New Zealand has roughly four million residents, making it one of the world’s least populated countries. Golf is the most popular sport with more courses per capita of population than any country in the world. And the world-class courses are complemented by food, wine and phenomenal scenery.

PerryGolf takes you there for a 13-Night, 7-Round Escorted Tour that simply must be experienced first-hand.

Admire native birds like the Kiwi or the Moa. The Kiwi, which is a flightless bird, has loose hair, strong legs and no tail. It is the national icon of New Zealand and the unofficial national bird. They can live from 25-50 years, although they are vulnerable to predators because they lack a sternum and have underdeveloped chest and wing muscles.

For the wine lover, Hawke’s Bay and its world-renowned wineries, is a highlight of any trip to New Zealand. It’s the nation’s oldest wine producing region in New Zealand is known for its full-bodied red wines and complex Chardonnays.

Speaking of breathtaking beauty, the golf at Cape Kidnappers provides the pinnacle.  This unique Tom Doak design in Napier ranked No. 44 in the world in Golf.com’s 2017-18 rankings delivers stunning panoramic views of Hawke’s Bay. The fairways perched 157 meters above the sea, on the grounds of what was formerly a 5,000-acre sheep station.

Our goal in designing golf courses is to create interesting holes you wouldn’t find anywhere else. That wasn’t hard to do at Cape Kidnappers, because the site is not like anywhere else in golf. If it were any bigger or any more dramatic, it would probably be cordoned off as a national park. – Tom Doak

Tour the Lord of the Rings trilogy filming locations around Wellington, which is described as ‘the coolest little capital in the world.’

The only Jack Nicklaus signature course in New Zealand, is Kinloch, a links-style design tucked between gorgeous views of Lake Taupo and rugged farmland.  Often compared to the classic seaside links of the British Isles, Kinloch is a fair, yet demanding and memorable test of golf.

A scenic cruise of Lake Taupo features the Mine Bay Maori Rock Carvings and full commentary on the Maori culture and the area’s vast volcanic history.

And, tucked inside Lake Wakatipu and the Remarkables Mountain Range, is Jack’s Point, located 20 miles from the cozy resort town of Queenstown. Measuring nearly 7,000 yards from the championship tees, the course winds through a natural environment of tussock grasslands, native bush and massive rock outcroppings.

PerryGolf was proud to again partner with Azamara Club Cruises for an exceptional golf and sightseeing voyage through the Baltic Sea onboard the outstanding Azamara Quest. In this blog post we’ve recapped the spectacular experience guests enjoyed plus included photos and videos from the voyage. We hope you’ll join us in 2017 and 2018 for what shall surely be another spectacular Baltic Sea PerryGolf Cruise. 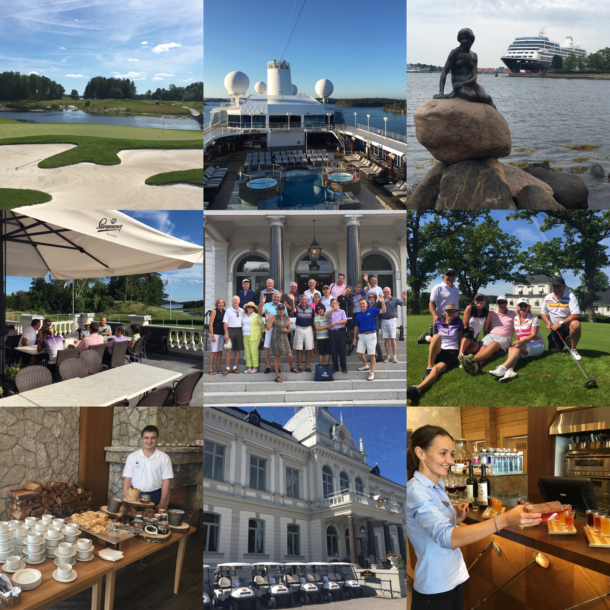 END_OF_DOCUMENT_TOKEN_TO_BE_REPLACED

Exciting news from Azamara Club Cruises! Splitting shifts to work around the clock, Azamara Quest now in dry dock in Singapore to soon come out as the REIMAGINED QUEST which will soon be enjoyed by PerryGolf guests on our Baltic Sea Golf Cruise in June and again in July on our 2016 Open Championship Golf Cruise at Royal Troon Golf Club. Check out these social media updates from Azamara Quest! END_OF_DOCUMENT_TOKEN_TO_BE_REPLACED

The following review was written by a client on board PerryGolf’s 2015 British Open Golf Cruise.

“A lifelong dream of ours was to play golf in Ireland and Scotland and to visit St Andrews. Our dream came true when we set sail on July 4th from Southampton, England on board the Azamara Quest for
PerryGolf’s signature golf cruise, “2015 British Open at St Andrews by Sea“… END_OF_DOCUMENT_TOKEN_TO_BE_REPLACED