The Machrie on the Island of Islay, off the west coast of Scotland, had always been a favorite of mine having visited it many times since the 1990’s. Islay is famous as the source of world class malt whisky due to its heavily peat soil which creates a very distinctive flavor of whisky. The golf course was as traditional a Scottish links as you could find with as many as 8 blind tee shots and 8 blind approaches, a throwback to a different era. You had to play it on several occasions to learn the correct lines and how to play in the different conditions that face you. It wasn’t a long course but it didn’t need to be, however you had to find the fairway and that is where the difficulty lay. It was a special place to play golf, the feeling of isolation, just you versus the course and the elements. It was however not for everyone, you could say the course was too hard even for the average player, the blind shots combined with rough so thick you rarely found a ball that missed the fairway. END_OF_DOCUMENT_TOKEN_TO_BE_REPLACED 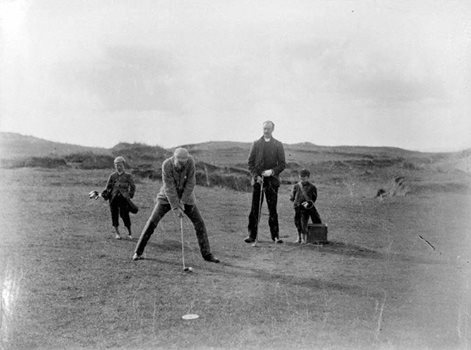 The Machrie takes its name from the Gaelic word machair, which means the links. Set in the dunes of Islay, and designed in 1891 by Willie Campbell, it is the traditional Scottish links.
END_OF_DOCUMENT_TOKEN_TO_BE_REPLACED

END_OF_DOCUMENT_TOKEN_TO_BE_REPLACED 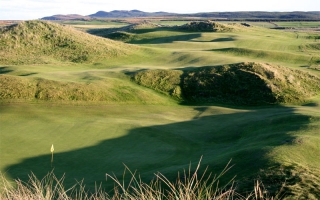 CBS Sunday Morning News ran a story during the holidays about Islay single malts that reminded us that the flight from Glasgow to Scotland’s famous Isle of Islay (EYE-lah) takes less than an hour.  Whisky loving links golfers who journey this way with a week or so to chase their passions will find their quest for Scotland’s pride and joy off to an outstanding start.

First there is the joy that is an Islay single malt.  There are nine distilleries on the island who find themselves set apart from Scotland’s other whisky regions because the peat they use to fire their kilns and smoke their barley produces the boldest malts made.  Islay’s tradition with peat is not exclusive to Scotch whisky production but it is profoundly distinctive.  Sunday Morning reports that more than a billion dollars’ worth of Islay malts were exported to the States last year.  The New York Times spirits panel wrote in 2011 that as they tasted 20 single malts from Islay, “ we reminded ourselves to step back a moment, to contemplate with no small amount of awe the magic of what was in the glass.”   Roll Tide but Islay is also home to golf magic, at The Machrie (1890), found five miles from the Laphroaig (lah-FROYG), Ardbeg and Lagavulin distilleries who are queued up along a two mile stretch of the A846.   The Machrie would be a good proshop to patronize because you’ll go on to meet plenty of golfers who have heard of it but not so many who have played. 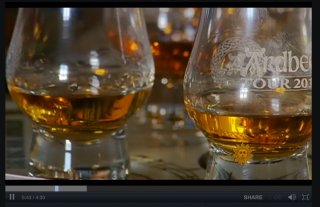 The same can be said for your next round. After a night or two in single malt heaven, the focus will turn to Scotland’s pride – her classic and clever links – beginning with Machrihanish.  Machrihanish (1876) isn’t ordinarily “on the way” but if you’re bound for Turnberry from Islay, the Mull of Kintyre is immediately on the left at the end of a two hour ferry ride.   The Mull is home to Old Tom Morris’ masterpiece, along with its impressive neighbor and newcomer Machrihanish Dunes ( 2009).  Accommodations are superb at The Royal Hotel or The Ugadale Hotel or the Ugadale Cottages, the dining is exceptional, the pace is perfect.  The scene will change before you know it of course but you’ll enjoy two nights and 2-3 rounds before speed boating off to Turnberry.

The Kintyre Express will ferry you back to the real world, 40 miles away across the Firth of Clyde to the Scottish mainland, in time for your first round on the Ayrshire Coast.  Another thing to like about this trip is how the first part gives you a tune up for the second part when you’ll be playing two of the most historic courses in championship golf.  Having a little game on a British Open layout is a good thing, so you can go home with the right kind of stories about Royal Troon (1878) and The Ailsa at Turnberry (1909).

A spirited romp through Scotland’s Links and Whisky Trails

A sign in the Glasgow Airport proclaims that Scotland is the best small country in the world. Aye, especially if your idea of heaven is hitting true seaside links by day and enjoying a wee dram and genuine Scottish hospitality in a snug pub or castle by night.

In fact, it was over a few amber elixirs with …