NEW! We are excited to inform you of the newest addition to our PerryGolf Galleries – Old Head Golf Club. These incredible photographs have been taken by Aidan Bradley, a leading golf course photography specialist in the world.

END_OF_DOCUMENT_TOKEN_TO_BE_REPLACED

The Old Course at St. Andrews has been named as the world’s number one course by a poll of golf course architects from all over the world. 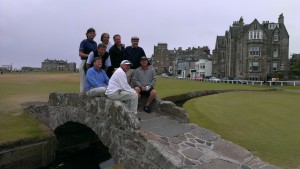 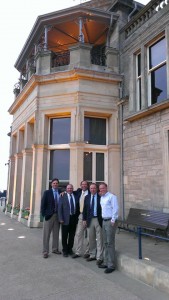 You’ll appreciate the setting at Royal St. David’s from the minute you pull up into the car park in the shadows of the overlooking Harlech Castle.  It’s a spectacular view as it’s perched on top of the hill and can be seen from almost every hole.  The course itself is relatively flat, but don’t be fooled as the fairways are tight and the rough punishing, so it’s not for the faint-hearted.  The greens are true and were exceptionally fast for April, and with the back nine playing straight into the wind, it wasn’t the best day for scoring when your game’s as rusty as mine, but I thoroughly enjoyed every minute of it.

To add to the enjoyment, we played in beautiful sunshine, which if you’ve been following any of my blogs from my trip to Wales, you’ll realise was the case every day – the Welsh will tell you it’s like that 365 days a year.

There were only 3 of us playing, so a local member called Jim joined us to make up a fourball.   Jim used to play for one of England’s most famous soccer teams (Everton) so as a big Liverpool fan (the two teams are great rivals) I gave him a bit of stick on our way around.  In return, he gave me a valuable golf tip which sorted my driving out… and resulted in me not losing a single ball for the rest of my trip!  Happy days!

One of the courses I played in my recent trip to Wales was the fantastic Royal Porthcawl; generally regarded as the top course in the country.   It’s famous for hosting many amateur championships over the years and one of it’s most well known moments was being the course on which Tiger Woods famously lost to Gary Wolstemholme in the 1995 Walker Cup (his last defeat as an amateur).

After a great lunch, we headed out onto the course to be greeted by fantastic weather and barely a breath of wind.  It was ideal for scoring, but sadly no one decided to tell me as I left more than a handful of putts and some brand new Pro V’s out there, but what a course it was!  It’s not a long course, but it’s far from easy; with subtle hazards, dramatic slopes and fiery fairways and greens, it makes your approach shots extremely challenging.

I thoroughly enjoyed it from start to finish and it reminded me of some of the great, and more famous, Scottish links courses.  It’s definitely one that should be on the ‘must play’ list for regular travellers to the British Isles, because it is as good as many of the Open rota courses – and with some other excellent links courses nearby, such as Tenby, Pennard, Pyle and Kenfig and Royal St David’s, it would be a more than capable centrepiece for a great trip, be it as a couple or as a group of guys.

To read more information on the course, please click here .