From bicycle trails in Hamilton to subterranean adventures such as Crystal Caves to exquisite shopping, dining and cocktailing, strolls on the the coral sand beaches amid an island vibe, Bermuda is a refined gem in the North Atlantic Ocean.

PerryGolf proudly takes you there in April on its 2019 Charleston & Bermuda Golf Cruise, which features a round trip from New York City and includes an option to attend the final round of the Masters. Partnering with the 690-guest Azamara Journey, you’ll be comfortable on Bermuda in April when the average high temperature is 72 degrees and the average low is 63 – the ocean registers approximately 68 degrees.

Azamara’s Guide to Cruising to Bermuda

The Mid-Ocean Club is the island’s shiny gem. Revered by recreational golfers, championship chasers and architectural aficionado’s alike, Mid-Ocean is a rare layout conceived and crafted by Charles Blair MacDonald, who is perhaps better known for his designs at National Golf Links, Piping Rock and Sleepy Hollow. He did impeccable work on the island as holes twist through undulating valleys and perch high on cliffs overlooking the brilliant blue water in Harrington Sound.

Tom Doak renovated the course in the mid-2000s and converted the greens to Tif-Eagle, ensuring they’ll roll true for decades.

I think Charles MacDonald, like the rest of the Golden Age architects, had a great insight into what separates great holes from average holes – and how they could be played by all levels of golfers. The latter doesn’t imply simply placing tees at varied yardage from the green. MacDonald kept the basic strategies intact at all three of his tee boxes by using angles and length to their best advantage. It meant, in his world, that different levels of golfers could play against each other in match play without giving all these shots we do today. – George Bahto, golf course architect and MacDonald biographer.

During your stay in Bermuda, also enjoy a round at Port Royal, which offers spectacular views to rival those of Mid Ocean Club. Designed by Robert Trent Jones Sr. in 1970 and the recipient of a $14.5 million renovation prior to the course’s run from 2009 to 2014 as host of the PGA Grand Slam of Golf. The 16th hole measures 235 yards from the championship tees, forcing golfers to carry the Atlantic Ocean the entire way.

Of course, this 11-Night, 4-Round journey departs New York City and makes its first stop in charming, historic Charleston on the South Carolina coast.

See why Charleston is known as America’s Friendliest City. Visit Fort Sumter, where the Civil War began, and tour the historic plantations such as Boone Hall, which may look familiar to those who have seen Gone With the Wind.

Or just stroll around downtown, shopping on King Street and treating yourself to a meal every so often. Not only is Charleston known for amazing seafood, the downtown area has also enjoyed a barbecue renaissance in recent years with renowned pitmasters Rodney Scott and John Lewis among those opening restaurants. Another winner sure to please any palate is Husk, the home of chef Sean Brock. It was Bon Apetit’s Best New Restaurant in America in 2011, developing its menu entirely from locally sourced ingredients.

There’s golf to be played in the Low Country as well.

The Ocean Course at Kiawah Island catapulted on to the global golf scene in 1991 when the United States and Europe battled in a thrilling Ryder Cup that wasn’t decided until the final putt as Bernhard Langer’s par attempt grazed the edge of the cup. The layout, ranked No. 25 in the world in Golf Magazine’s 2017 rankings, continues to thrill recreational golfers and is a walking-only course played with caddies.

Over on Isle of Palms, the Links Course at Wild Dunes is the first design ever crafted by American architect Tom Fazio, who has the most courses ranked in Golf Magazine’s Top 100. From the opening tee shot at Links to the gorgeous finish overlooking the Atlantic Ocean, enjoy a course that fits the landscape and feels natural as it weaves through the rugged sand dunes and windswept shore.

Another thrilling Masters Tournament is in the books and Patrick Reed became the latest golfer to earn admission to an exclusive club (and the Tuesday Champions’ Dinner). The former Augusta State golfer shot 15-under par to claim the green jacket and a one-shot victory over Rickie Fowler.

Regardless the outcome and eventual champion, Augusta National Golf Club always delivers a dramatic finale each April. Officials set up the course in the final round Sunday to provide a palate for the world’s best players to put their incredible skills on display. This year alone, we watched as three golfers – Webb Simpson, Paul Casey and Jordan Spieth – scorched the Alister MacKenzie layout early and threatened the course record of 63 (held by Nick Price and Greg Norman) only to falter late as the ghosts of Masters past surely crept into their mind, one by one.

Obtaining a badge to attend the final round of the Masters has been called the toughest ticket in sports. Patrons pass them down to family members or perhaps loan them to friends and most who don’t know the right someone are usually out of luck.

PerryGolf is here to help, however. Next year, you could be one of the patrons watching a critical eagle on 13, awaiting an ace at 16 or cheering the champion as he makes the long climb up the 18th fairway to the green. Attending the final round is an option available to guests on our 2019 Charleston & Bermuda Golf Cruise, an 11-Night round trip out of New York City on the outstanding Azamara Journey.

Of course, you will do more than watch golf on this cruise, which is ideal for golf-loving couples and for golfers with spouses who don’t play golf. The cruise includes rounds at excellent courses bordering the Atlantic Ocean. Here’s what you need to know about the layouts you’ll enjoy on the cruise.

American architect Pete Dye crafted this gem for the 1991 Ryder Cup, which reached a thrilling conclusion when Bernhard Langer’s par putt on 18 slipped past the lip sending the U.S. team to a 14.5 to 13.5 victory.

Several players who competed in those matches returned 16 years later to battle the Ocean Course in the 68th Senior PGA Championship, won by the South African pro Denis Watson with a 279 total.

Then, in 2012 Rory McIlroy, the young superstar from Northern Ireland, enhanced his blossoming future, blistering the Ocean Course in 13-under and blitzing the PGA Championship field by eight shots to secure his second major championship.

With 10 holes running alongside the Atlantic Ocean, handling the wind is one key ingredient to taming this monster. In addition, the course is one of only a few in North America that features the saltwater tolerant Paspalum grass on its fairways and greens. It can be tricky to read – and present a devilish rough.

“There’s no other course in the Northern Hemisphere that has as many seaside holes,” – Ocean Course architect Pete Dye

Along those lines, don’t forget to pack an extra sleeve of balls – or three – before tackling the Ocean Course.

Charles Blair MacDonald was a pioneer in American golf course architecture, crafting gems such as the New York triumvirate of National Golf Links, Sleepy Hollow CC and Piping Rock Club in the early 20th century. Also in this era, he designed a gem on Bermuda, the small island in the Atlantic Ocean, 880 miles east of Charleston, SC. 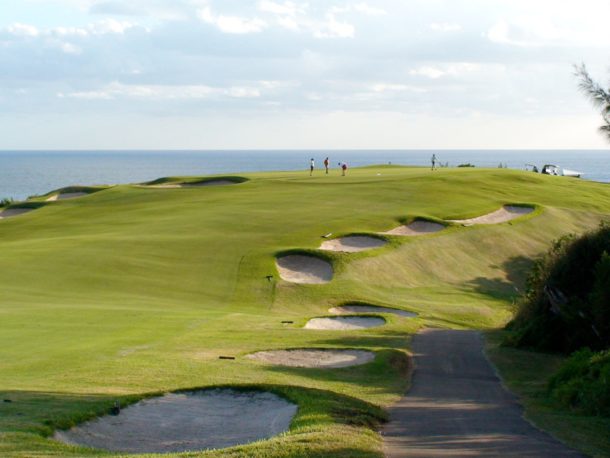 Opened in 1921, Mid-Ocean features not only stunning panoramic views of the ocean, but also incredibly intricate strategic gems such as the par-4 No. 5, which provides the ultimate in risk & reward, tempting golfers to challenge the water hazard and carry as much of it as they can.

The course measures only 6,540 yards from the championship tees but the always present strong wind and intensive bunkering creates a stiff test for golfers of any skill level.

Robert Trent Jones Sr. designed this beauty in 1970, giving golfers on Bermuda another championship layout on which to test their skills and enjoy the abundant scenery.

RTJ Sr. was a prolific golf course architect with more than 400 courses to his credit in the United States and throughout the world. His sons, Robert Trent Jones Jr. and Rees Jones have carried on his legacy.

Measuring 6,842 yards from the championship tees, Port Royal is the longest course on Bermuda and presented a terrific test for the reigning major champions when it played host to the PGA Grand Slam of Golf in 2009 and 2010.

The 16th hole at Port Royal is a magnificent par-3, a stout 235 yards from the tips with only the glorious blue water of the Atlantic Ocean between the golfer and the green. Proper club selection and impeccable execution are imperative to solve this daunting riddle from any set of tees. 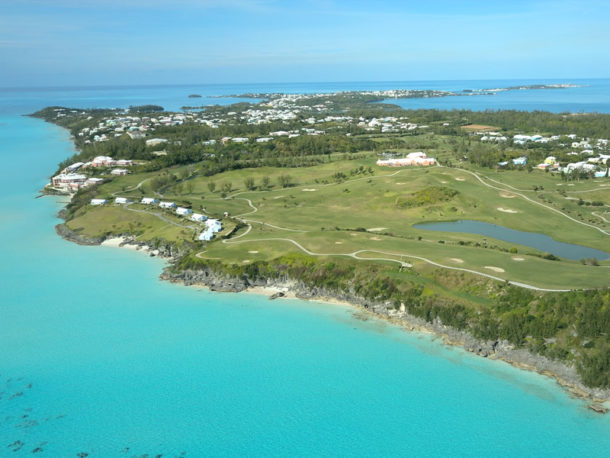 As I reflect on the state of the golf world on this Sunday before the Masters, it would be folly of me not to recall 12 short months ago when golf was squarely in the cross hairs of popular commentators and blamed by some as a key element in the demise of the world economy. To paraphrase, golf was the breeding ground for many of the problems of the day as rich white men from Wall Street mixed with Washington politicians on junkets to play golf and devise plans to undermine our economy and enrich themselves. Additionally, the idea for golf to be used as a marketing tool for Northern Trust or Wachovia or Morgan Stanley was completely inappropriate in the minds of the press and in turn politicians. It was a public lynching of an honorable sport.

Fast forward twelve months and the upcoming Masters. The economy is on the mend. We still have a long way to go however but unemployment appears to be have reached it’s peak and there are various indications of an improving economy. Golf is still being played, although many country clubs are in deep financial trouble for various reasons. If Tiger Woods is in contention this coming weekend at the Masters, potentially it may be the most viewed sports broadcast in history…and golf will be center stage. At first when I heard the idea of Tiger’s return at Augusta I was surprised, but as everything has played out it has been a stroke of brilliance by Chairman Billy Payne of the Augusta National Golf Club. It would also appear Augusta National  are taking advantage of this opportunity to be in the eyes of so many “new golfers” by introducing new technologies, such as 3D golf and even more in depth internet coverage of the tournament. While some of these “new golfers” may be more in tune with Entertainment Tonight and TMZ, I believe the Masters will show the world this week another compelling sports spectacle. Twelve months ago, no one could ever have predicted Tiger’s fall from grace nor any of the twists and turns to the story. It is strange world that we live in, and as you often hear, “….you just could not make this stuff up!”.

Seven days from now we shall all be enthralled by the back nine on Sunday at Augusta…enjoy, for doubtless many more sub plots will emerge as the week progresses.