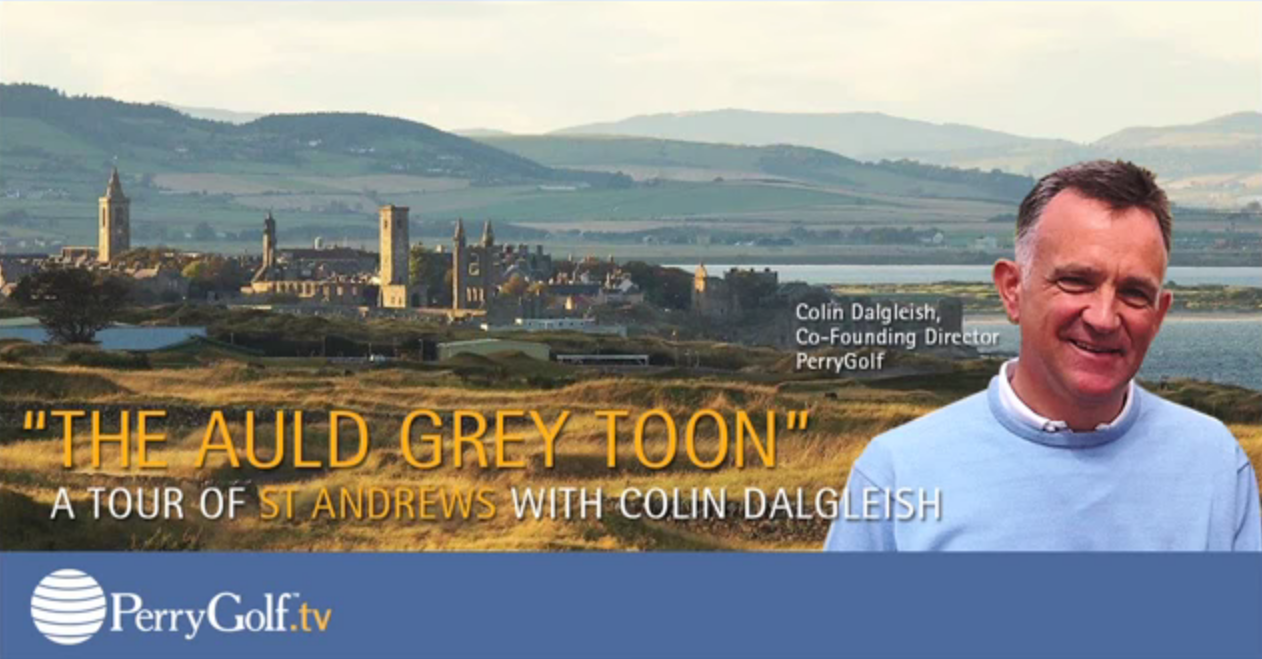 PerryGolf Co-Founder Colin Dalgleish knows a thing or two about the Home of Golf, as you’d imagine from a Scotsman who’s played the Old Course at St Andrews since he was 12 years old. Believe it or not however there is more to the Auld Grey Toon than her famous links which Colin< explains in this part historical, part local knowledge HD video that covers a lot of (sacred) ground.

END_OF_DOCUMENT_TOKEN_TO_BE_REPLACED

As a past Great Britain & Ireland Player and Captain, PerryGolf’s Colin Dalgleish attended this past weekend’s 2013 Walker Cup match at the spectacular National Golf Links of America on Long Island, New York.

END_OF_DOCUMENT_TOKEN_TO_BE_REPLACED

PerryGolf’s Founding Director, Colin Dalgleish, has recently returned from the 2013 British Open Golf Voyage.  Below are some of his thoughts July 17 upon embarking on the quest, as well as some of his afterthoughts on July 25.  The golf cruise was to no surprise, another success for both PerryGolf and clients.  Between the five rounds of golf, attending the final round of The Open Championship at Muirfield, cocktail parties and much more fun in the sun, the slideshow below only sheds a mere glimpse into what a luxury golf cruise it really was.  But I bet it’s enough to make you wonder about the 2014 British Open Escorted Tour…Enjoy!

“As the The Open Championship is shortly about to begin at Muirfield Scotland, the PerryGolf British Open voyage around Ireland and Scotland is now well underway. PerryGolf guests onboard the delightful 700 guest Azamara Quest have already enjoyed a pre-cruise stay at the The Westin Dublin Hotel followed by golf at 2006 Ryder Cup venue the The K Club outside Dublin, the classic links of world top ten Royal County Down Golf Club, and the excellent Carrick overlooking the beautiful Loch Lomond in Scotland. Combined with a great range of sightseeing activities for the non golfing spouses amongst the group, and some outstanding dining, entertainment, and all inclusive drinks onboard, the 100+ PerryGolf guests are having a great time!”

“PerryGolf’s highly successful 2013 British Open Golf voyage onboard the 700 guest Azamara Quest concluded earlier this week. Since our previous post from the Carrick Loch Lomond, the ship sailed through the western isles and around the north of Scotland before PerryGolf guests had exclusive use of Castle Stuart Golf Links only a few days following the Scottish Open Championship.  She then continued to Scotland’s beautiful capital city of Edinburgh where her central berth afforded guests panoramic views of the city during the two day stay.  After golf at Kingsbarns and attendance at the final days play at The Open Championship (a mere 35 minute transfer from the ship), guests then enjoyed a relaxing day at sea on Monday in perfect weather, the final few miles into the city of Hamburg being accompanied by water cannon spraying tugboat.”

Enjoy the slideshow of pictures taken during the recently concluded 2013 British Open Golf Voyage by PerryGolf.  Watch out for future plans.

You can also engage yourself with our fully interactive Google Earth Video of the 2014 British Open Escorted Tour – you’ll be able to pause the video and browse around the area as you please via Google Earth.  Thanks for reading!

Friday, May 17: Golf & The Mediterranean under Sun and Sail

PerryGolf’s 2013 voyage onboard the luxury tall masted yacht LE PONANT gets underway today with embarkation in Nice, France.  Watch out for posts along the way as she visits Italy, Sardinia, Corsica and Sicily before concluding in Valetta, Malta.  Five beautiful but hard to reach golf courses and a day at sea under sail.  What a trip!

END_OF_DOCUMENT_TOKEN_TO_BE_REPLACED

Hello again from Colin Dalgleish in South East Asia where my visit continues with a stop in Siem Reap Cambodia. This country reopened its doors to visitors just 20 years ago, after suffering decades of civil war and international isolation. It has now established as one of the fastest growing economies in Asia. The ancient lost temples of Angkor Watt here just outside Siem Reap have rapidly moved onto the must-visit list for many international travellers. The area is now also home to three excellent golf courses. It’s mix of modern golf, fascinating history, and wonderful hospitality makes it a perfect three or four night stop on any south east Asian tour, exactly as we have scheduled for our February 2014 fully escorted tour to the region. By the way, a piece of trivia for you, Cambodia is the only country in the world to feature a building (Angkor Watt) as a part of its national flag. Take a look at the National Geographic video of the history of Angkor Watt