The timeless handiwork of Dr. Alister MacKenzie and architects of comparable acumen created incredible golf in the Melbourne Sandbelt.  There are myriad courses dotted across Australia that attract golfers and tourists to the land Down Under each year. It’s a particularly appealing destination to Northern Hemisphere residents eager to escape winter’s chill.

Of course, Australia is also a unspoiled country filled with appealing natural scenery, cosmopolitan cities of Melbourne and Sydney and home to some of the warmest, endearing and fun-loving people on Earth.

The Best of Australia Escorted 2020 is a popular journey with PerryGolf clients, featuring 12 nights and a half-dozen rounds of golf at gems such as Royal Melbourne, New South Wales and Barnbougle Dunes.

PerryGolf can fulfill your Australian dreams. Here are three sights not to be missed.

From the brilliant Lin-Manuel Miranda’s new musical to a John Lennon retrospective, ballets, plays, evenings filled with illusion and much, much more, there’s a diverse lineup of entertainment offered inside the iconic venue which U.S. architect Frank Gehry described as “a building well ahead of its time, far ahead of available technology … that changed the image of an entire country.”

With more than 8.2 million annual visitors to the site, including 350,000 who tour the buildings, the Sydney Opera House is Australia’s top tourist attraction. It comprises multiple performance venues that present more than 2,000 shows to 1.5 million people each year, operating 363 days.

The Opera House enjoys a fascinating backstory. It’s located on Bennelong Point in central Sydney Harbour on what was known as Tubowgule – where the knowledge waters meet – to the native Gadigal people. They gathered here and danced, sang and told stories – a tradition that lives on today.

The Danish architect, Jørn Utzon, was awarded the project in a 1956 competition. He studied nautical maps of Sydney to better understand the landscape and crafted a vision in harmony with the area, capturing the spirit of the nation. With construction costs rising to four times what Utzon had projected, however, his relationship with the Australian government crumbled. And in April 1966, just halfway through construction, he departed the country and never returned again. The rising young Australian architect Peter Hall was appointed to take over and the Sydney Opera House enjoyed its grand opening in October, 1973.

“The human spirit must sometimes take wings or sails, and create something that is not just utilitarian or commonplace,” Queen Elizabeth II said at the ceremony.

Considered the city’s most iconic structure, the Melbourne Cricket Ground was established in 1853, less than 20 years after Melbourne was founded. The nation’s primary stadium during 1956 Olympic Games, the MCG has also provided the stage for concerts by the Rolling Stones, Michael Jackson, The 3 Tenors, Elton John and Billy Joel. Popes and leaders of nations have been welcomed here and the MCG also provided military housing for U.S. Marines and U.S. Air Force during World War II.

Nestled in Yarra Park, a 10-minute walk from the heart of the city, the MCG is open seven days a week, located in Melbourne’s sporting center near Rod Laver Stadium, site of the Australian Open tennis championship. In addition to the epic cricket matches waged here, the stadium also is the home of Australian Rules Football, drawing near capacity crowds for the Melbourne Demons vs. the Geelong Cats and other rivalries.

The adjacent National Sports Museum features 3,500 objects from countless sports and is another must-see for visitors who share a love of sports and desire to learn more about cricket and the massive popularity it enjoys in Australia and around the globe.

One of the Seven Natural Wonders of the World and designated as a World Heritage Site, about one-third of the Reef is protected from fishing and other intrusive activities. Estimated at 20,000 years old, the Great Barrier Reef lies off Australia’s East Coast, contains an abundance of marine life and comprises 3,000 individual reefs.

Of course, don’t limit yourself to these highlights. Australia offers an array of sightseeing options and PerryGolf is thrilled to guide you Down Under, providing all the assistance necessary to help you enjoy the links and beyond.

The Cathedral of Santa Maria del Fiore in Florence is one of many memorable attractions in Italy made readily available on a PerryGolf Escorted Tour, catering to couples.

From the banks of Venice to the shores of Sydney, whether observing the flightless Kiwi or simply gazing out upon the beautiful water of Lake Como, PerryGolf offers myriad destinations for couples who seek to combine their passions of travel and golf.

Enrich your mind and replenish your soul while pursuing those pesky pars, making lasting friendships along the way with similar minded folks who walk alongside on a unforgettable journey. Each of PerryGolf’s Cruises, Custom Tours and Escorted Tours provides not only a host of activities, sightseeing, dining and, of course world class golf on amazing courses, but also ample time for relaxing, recharging and enjoying a vacation certain to create indelible memories.

(Also, keep in mind that if you book a PerryGolf cruise by March 31st, your better half saves HALF, and you will also receive free internet while on board select Azamara cruises).

While PerryGolf can take you from the British Isles to South Africa and many points in between, learn more about these three destinations which are ideal for golfing couples:

If ever there was a country suited for traveling couples, it’s this European destination which is famously shaped like a boot.

Whatever you prefer – or why not a taste of each? – Italy caters to couples, allowing ample opportunity to indulge and inhale each scene and delight. Inquire about PerryGolf’s Best of Italy Escorted 2018, which begins Aug. 25 and spans two weeks, traveling from bustling city streets to quiet countryside. Admire Michelangelo’s amazing painted ceiling in the Sistine Chapel, feel in awe while gazing deep into Da Vinci’s Last Supper and you never know which A-List celebrity you may bump shoulders with while strolling about Lake Como.

The golf is stellar. Marco Simone will be the site of the 2022 Ryder Cup and is certain to present a daunting challenge to the finest professionals from Europe and the United States. Located 10 miles from the center of Rome and meandering around an 11th century castle, Marco Simone combines a creative mixture of challenge, beauty, risk and reward, designed by noted American architect Jim Fazio. The par-5 16th hole, measuring 550 yards from the championship tees with its green defended by a menacing stream is certain to snare the attention of each man or woman who passes through.

A major shipping hub and port in the 18th century, Positano today is a sophisticated resort gazing down over the gorgeous central Amalfi Coast in Italy. Explore along steep flights of steps, if you wish. The town’s origin is traced to the ninth century and its nucleus centered around a Benedictine Abbey.

John Steinbeck, Pablo Picasso and Liz Taylor are among those who have fallen hard for the charm of Positano.

Sparse in population, rich in beauty and abundant in local hospitality, New Zealand demands at least one visit from any adventurous traveling couple.

From Taupo to Queenstown and every interesting point in between, PerryGolf delivers a unforgettable experience in New Zealand, offering both an Escorted Tour which begins Nov. 5th and a delightful cruise which departs in January, 2019 in addition to Custom Tours of your preference.

Let’s start with the golf, which in recent years has increased in quantity and quality. The incredible landscapes, rocky cliffs and vistas of sparkling blue water provide the perfect canvas, enabling talented course designers to craft masterpieces worthy of the trip required to experience them.

Along those lines, Cape Kidnappers receives all the headlines – and rightfully so. This Tom Doak masterpiece makes Pebble Beach look mundane, demanding shots over trees to targets in slivers of land nestled 500 feet above the glorious Hawke’s Bay. Equally enjoyable is Royal Wellington – the first in New Zealand to receive the Royal designation – and a regular host of the New Zealand Open – most recently in 2014.

Away from the links, Hawke’s Bay and its world-renowned wineries will make any wine connoisseur feel warm and fuzzy. It’s the nation’s oldest wine producing region in New Zealand is known for its full-bodied red wines and complex Chardonnays.

Lake Taupo is a destination beyond description. Called “Nature’s Ultimate Playground,” the brilliant scenery from Huka Falls to Mine Bay Maori Rock Carvings must be explored and PerryGolf provides ample time for just this on the journey.

Dates haven’t been finalized for the Best of Australia Escorted Tour 2019, but expect it to begin in January or February – and expect it to fill up quickly. The array of quality golf, interesting cities and warm people make Down Under a special landing spot. Then again, the warm climate awaiting when most Northern Hemisphere residents battle nip and chill of winter doesn’t hurt Australia’s seasonal popularity, either.

The golf is stunning in this grand sporting nation. We’ll discuss, momentarily, the world renowned layouts and immaculate conditions. But first, consider the wealth of attractions to realize in Sydney, Melbourne and beyond.

When discussing iconic images, the Sydney Opera House takes center stage. Located on the glorious Sydney Harbour and perhaps the most easily recognized structure in all of Australia, it welcomes seven million visitors annually. Take a guided tour or better yet – enjoy one of the 1,500 performances the Opera House holds each year.

For deluxe accommodations, the Langham Melbourne is an exquisite 5-star hotel on the banks of the Yarra River. Calm your body, mind and soul as East meets West in the Chuan Spa, which is considered among Australia’s finest.

Vue de Monde is simply one of many elite dining options available in downtown Melbourne. Be sure to save room for the rest and enjoy the view from 55 stories above the city, gazing across the skyline.

In Queensland be certain to visit one of these restaurants. We can almost taste the Patagonian Toothfish and Sydney Rock Oysters. 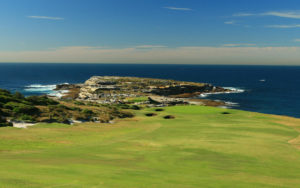 There are so many of the world’s best golf courses from which to choose. New South Wales (right) opened in 1928 after the Scottish architect Dr. Alister MacKenzie unveiled his brilliant vision. Abutting the Tasman Sea and Botany Bay, the layout is routinely ranked within the top five in Australia. Over on the northeast coast of Tasmania, the two courses at Barnbougle Dunes – The Dunes and The Lost Farm send scribes scrambling to the online thesaurus seeking other ways to say spectacular.