This week our guest for a Greenside Chat is Jon McCord, Director of Golf at Cape Kidnappers and Kauri Cliffs, two of the world’s most stunning courses located on the North Island of New Zealand. Jon discusses his journey from growing up in a small town in Iowa to managing these two remarkable courses, owned by Julian Robertson – former superstar trader and hedge fund manager from North Carolina. Jon describes what’s so special about these two courses and the luxury lodges situated onsite, and shares insight to many of New Zealand’s other marquee courses, cultural experiences, and reasons why New Zealand checks off all the right boxes for golf, wine and travel enthusiasts.

END_OF_DOCUMENT_TOKEN_TO_BE_REPLACED

Lydia Ko won her 15th tournament on the LPGA Tour earlier this year, pushing her career earnings near $10 million. Just 21 years old, she’s already traveled around the globe competing in amateur and professional golf championships. She remains captivated by the phenomenal cast of courses in her homeland.

“New Zealand is simply an amazing golf destination,” Ko said. “It has some of the best golf courses I have ever played. It should be a must-visit place for golfers from all over the world. You won’t be disappointed.”

Perhaps there was a time when the beautiful country of 4.7 million people across two islands tucked in the South Pacific was a hidden destination for international golf travelers.  The secret, however, has been revealed over the last two decades as New Zealand enjoyed a barrage of dramatic, spectacular courses certain to create indelible memories and eager returns.

PerryGolf is thrilled to take travelers to this magical land. The 2020 New Zealand, Tasmania & Sydney Golf Cruise is certain to sell out and includes several of the finest courses in New Zealand, which features roughly 400 courses. Golf is the most popular recreation for male and female Kiwis. After a week or so down there, you’ll understand the source of their fierce attraction to the game. 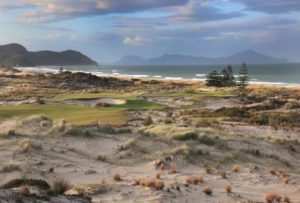 PerryGolf president and co-founder Gordon Dalgleish visited Tara Iti in 2016 shortly after the mystical course opened and walked away impressed that architect Tom Doak created a world class seaside links on what was a dense pine forest. The first course in New Zealand with fescue grass on the fairways, Tara Iti plays firm and fast with no rough. Bunkers border the fairways which are mown a similar height as the greens. Approach and recovery shots provide myriad options for playing shots along the ground and allowing the contours to feed the ball to the hole.

One interesting shot after another is presented throughout the round at Tara Iti, which catapulted into the Golf Magazine Top 100 in 2017, making its debut at No. 29.

Located on the southern end of the North Island overlooking Hawke’s Bay in the New Zealand wine country, Cape Kidnappers was born from owner Julian Robertson’s affection for Pacific Dunes on the Oregon coast. After playing that course with his son, he sought out its architect, Doak, to design Cape Kidnappers along 2,600 yards of shoreline. The course opened to guests in 2004 and instantly shot near the top of the country’s rankings.

“We were deliberately subtle with our architecture as there was no way in the world to compete with the surrounding beauty,” Doak said.

Avoid the bunkers at any cost at Cape Kidnappers. On land of devoid of trees and essentially free of water hazards other than the obvious cliffs and ocean below, the bunkers are deep and penal.

Doak used the greens at Garden City Golf Club on Long Island as a model, devising the slopes in harmony with the natural rolling characteristics of the land. The par-4 No. 14, measures only 350 yards from the back tees but the green will remind visitors of the Road Hole No. 17 at The Old Course at St. Andrews.

Enjoy the remote setting as you pass a sheep and cattle station heading to the pro shop.

PerryGolf Escorted Tours are a great way to Play the Game. See the World.

“A designer can always make a golf course too hard,” Kauri Cliffs architect David Harman said in 2003. “He can add more bunkers, more walls, whatever he dreams up. The true test is whether or not he can use what Mother Nature gave him and turn it into something like what you see here.”

Kauri Cliffs was truly Harman’s masterpiece. He made 46 trips from his home in Florida to this property that neighbors Cape Kidnappers but was the first to open in 2001. He made the aforementioned comment to legendary golf commentator Jack Whitaker in 2003 when Fred Couples and Michael Campbell competed in a Shell’s Wonderful World of Golf match at the course (watch below).

Sadly, Harman succumbed to cancer in 2004. But his legacy lives on in this magnificent setting which offers breathtaking views of the Cavalli Islands and Matauri Bay.

Swirling, gusting winds make the course play differently from hour-to-hour. Yardages are only a suggestion. Downwind, par-5s can be reached with a mid-iron second shot. Into the wind, they are unreachable in three. With options ranging from 4,900 to 7,100 yards, finding the appropriate teeing ground is imperative to maximize enjoyment.

Risk / reward holes dot the property. But be careful. You won’t soon forget the par-3, No. 7.

Located 20 miles from Queenstown on the shores of Lake Wakatipu, the championship golf course at Jack’s Point is just one piece of an idyllic escape offering hiking and mountain biking trails and pure serenity.

The course, designed by John Darby and opened in 2008, sits atop sharp bluffs overlooking the lake and meanders through the wetlands and rocky hillside. Many experts consider it the best on the South Island. Created with minimal excavation, it fits naturally into the landscape and measures 6,986 yards with a par of 72 from the championship tees.

The tee shot at the downhill par-3 7th is remarkable (add an ‘s’ and you have the name of the mountain range in clear view throughout the course). Golfers fire toward a infinity green with the crystal blue waters of the lake as the backdrop.

While that quartet is outstanding, it’s not as if they’re the only excellent options available in New Zealand. The layouts are diverse and demanding.

Breezes blow tall at Paraparaumu Beach, 45 miles north of Wellington, where Tiger Woods competed in the 2002 New Zealand Open – for a hefty appearance fee rumored to be four times the size of the purse. The Kinloch Club is the first (and only) Jack Nicklaus Signature Course in New Zealand, carved through farmland on volcanic terrain. The Hills is another Darby creation which has played host to the national championship on multiple occasions. Royal Wellington dates to 1895 and is like ‘playing golf in an Arboretum’ according to architect Greg Turner, who redesigned the course in 2013. And Wairakei is a parkland favorite near beautiful Lake Taupo on the North Island.

From the Golf Channel, Jason Deegan writes, “”What distinguishes New Zealand golf from the U.S. is the courses are not part of the housing,” he said. “You can see the hills, the water, the mountains. The physical beauty of the courses is amplified by the surroundings. It’s a unique experience.”

END_OF_DOCUMENT_TOKEN_TO_BE_REPLACED

Not to state the obvious, but New Zealand is a fantastic destination for golfers and non-golfers alike.  Yes it does have fantastic golf courses; especially in the shape of Kauri Cliffs, Wairakei, Cape Kidnappers, Jack’s Pint and The Hills to name but a few; but it also offers some great activities for when you are not on the course.  In the Bay of Islands you can cruise around the little islands off the coast, in Taupo see the awesome Huka Falls, in Napier take in a selection of great wineries and in Queenstown see some of the most beautiful scenery in the world.  The Remarkables mountain range is on your doorstep and stunning Milford Sound is just a short flight over the Southern Alps.

Another activity that I had to do when I was there…a bungee jump!  I understand it is not for everyone but bungee jumping originates (commercially anyway) in Queenstown so it was a must for me to do this at the original Kawarau Bridge site which is just a short drive out of Queenstown.  I booked it the day before to avoid being disappointed however this did lead to a somewhat sleepless night beforehand.  On arrival you register and make your way out to the bridge where, after a short wait and being harnessed safely, you are led out on the platform.  Then it is up to you.  I found it best not to think about it at all and just go for it. The sensation is incredible and as close to flying as I can image.  If you are in need of some persuasion to have a go I can tell you it also does wonders to rejuvenate a tired back after golf!

By Alastair Niven.  Alastair has been with PerryGolf for over 11 years and looks after of our South Pacific Programmes.