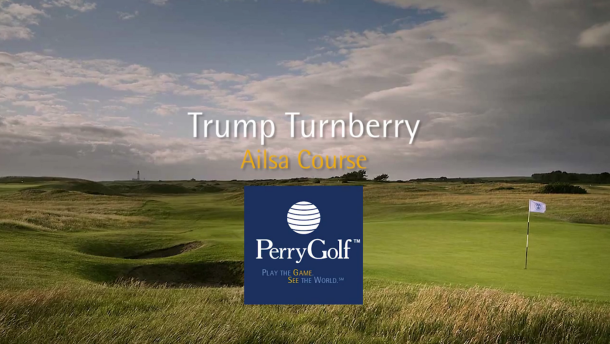 Designer Mackenzie Ross is credited with restoring the course to championship standards when it re opened in 1951 after World War II when the property was converted to an RAF airfield and hospital.

Today the layout is a fixture among the best 25 courses in the world. Ailsa has staged The Open Championship on four occasions beginning in 1977 with the legendary showdown between Tom Watson and Jack Nicklaus remembered as the “Duel in the Sun.” Watson’s weekend of 65-65 clipped Nicklaus’ 65-66. They both birdied 18 on Sunday; Nicklaus from 40 feet, Watson from 3!

No. 9 “Bruce’s Castle” is Ailsa’s trademark hole played from the shadow of Turnberry’s landmark lighthouse. Extensive renovations planned for the course include converting No. 9 from a 452 yard par four to a 235 yard par 3. See our blog post about the changes at here.

Do you want to play The Ailsa Course at Trump Turnberry? Check out the PerryGolf Scotland Packages below!

The Ailsa Course at Trump Turnberry