The 148th Open ventures to Northern Ireland this summer for the first time since 1951, returning to the Dunluce Links at Royal Portrush. (One golf spot remains on PerryGolf’s cruise that will take you to The Open). Like the rest of the golf world, we can’t wait to see the renovated links and are eager to watch the game’s best golfers face the stiff challenge presented by the course, conditions and elements.

Attend the The Open at Royal St. George’s in 2020 with PerryGolf

PGA champion Brooks Koepka, World No. 2 Dustin Johnson and defending champion Francesco Molinari head the list of exempt players. As of today, 97 players have earned entry into the field either through qualifying at sites around the world or receiving an exemption based on tournament performance and world ranking. The final rounds of qualifying will take place in the weeks preceding the championship at sites around the U.K.

This quest for the Claret Jug has stirred curiosity across the British Isles, where The Open rotates between a strong roster of courses in Scotland and England.

The “Royals” in England are a diverse quartet of links, bolstered by a rich tradition and formidable architecture enabling them to withstand the game’s advances in technology and Mother Nature’s fierce hand. In addition, England has other fine courses, often overlooked, that are regularly used for Final Qualifying in The Open.

Before you let PerryGolf take you to play these venerable layouts where champions have been crowned and reborn, let’s examine seven of England’s finest courses.

Royal Birkdale – Since joining The Open rota in 1954, it’s been the most regular venue other than St. Andrews. The course also has played host to more championships and international events than any course in the world since World War II, including Walker Cups, Ryder Cups, Curtis Cups and Women’s and Senior Opens. Ranked No. 1 in England and top five in the U.K., Birkdale was formed in 1899 but the current links was established in 1922.

Royal Lytham & St. Anne’s – Bobby Jones won The Open here in its 1926 debut on this links in Lancashire. En route to The Open title in 1979, Seve Ballesteros literally got up-and-down from a parking lot, which perhaps served as origin of a phrase used around the world when referring to golfer’s great short games. Esteemed golf writer Bernard Darwin described Lytham as a ‘just beast.’ Locke, Player, Thomson and Els also won here.

Royal Liverpool – Most folks call it Hoylake because that’s the village where the course is located. Tiger Woods and Rory McIlroy have fond memories of the course, which is site of The 151st Open in 2022, because each rode supreme ballstriking to a major championship victory there. Woods’ victory in 2006 was particularly emotional because it was his first major since his father, Earl, passed away.

Royal St. George’s – The 149th Open will be held here, nine years after Darren Clarke finally broke through and hoisted the Claret Jug on his 20th appearances. Maiden, the par-3 6th, is a spectacular vantage point for spectators due its large mounds surrounding the green and the wicked wind which can wreak havoc on a golfer’s approach. Greg Norman shot a record 64 to win one of his two titles here at the southernmost course in The Open rota.

Southport & Ainsdale – Twice a Ryder Cup host, S&A was designed by the prolific James Braid and fits seamlessly in the rolling linksland. Many who have qualified for The Open in recent years first had to master S&A for 36 holes in final qualifying. Established in 1906, we’re fond of the first hole, a par-3 measuring 204 yards from the tips and the clubhouse, which offers the ideal setting for a post-round beverage and rehashing.

Hillside – Another fixture on England’s Golf Coast in the area around Southport, the 7,029-yard course wanders up-and-down sandhills and through towering pines to create a tranquil setting – until you try to par some of the holes on this beauty, redesigned by Fred Hawtree in the 1960s. The European Tour’s professionals will try their skills here in the 2019 British Masters.

Formby – Since 1884, golfers from across the U.K. have enjoyed the challenge at Formby, which combines the best of links and parkland golf in a delightful array of variety. The shots required here force golfers to mesh skill and strategy as they meander through the pines. Navigate the undulating fairways, avoid the deep bunkers and handle the gusting winds and you might just solve this riddle.

Royal St George’s Golf Club will host The 149th Open Championship in 2020. Located in Sandwich on the Kent Coast in Southeast England, Royal St George’s dates back to 1887 with design credit to William Laidlaw Purves.
END_OF_DOCUMENT_TOKEN_TO_BE_REPLACED 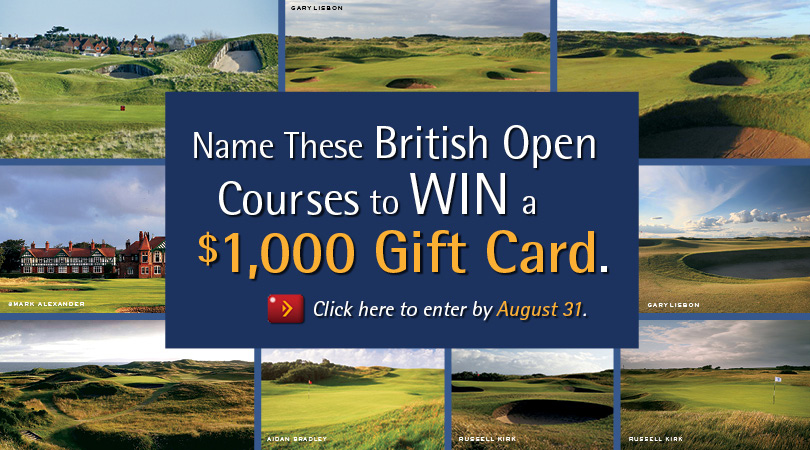 Enter by 8/31/2015
You could WIN a $1,000 Gift Card for Turtleson, a manufacturer specializing in lifestyle apparel for golfers. END_OF_DOCUMENT_TOKEN_TO_BE_REPLACED

A top golfing destination that is often overlooked, South East England offers some of the world’s most distinguished golf courses and luxury accommodations, making it the perfect location for a most memorable golf vacation. Here’s why…
END_OF_DOCUMENT_TOKEN_TO_BE_REPLACED