Traveling across the world to play golf and absorb the culture is a thrilling opportunity, one to be seized and relished. Once you arrive at your destination, however, it’s a nice perk if there are many exceptional golf courses located within a small radius. Then you can simply unpack your bags, settle in, and spend more time chasing birdies, enjoying the scenery and your companions while you spend less time traveling between your accommodations and the first tee.

These three remarkable clusters, located around the globe, offer exceptional, unforgettable golf, enabling you to play the world’s finest layouts while limiting your travel time. Each area is serviced by PerryGolf through an array of Custom Tours, Escorted Tours and Cruises.

With a population of more than 4.5 million, Melbourne is a beautiful, culturally intense cosmopolitan city in Victoria on the southeast coast of Australia. Combining delightful winter weather and friendly English-speaking people with an entertainment and gastronomic wonderland, it’s easy to see why Melbourne is a popular destination for curious and adventurous global visitors.

Complementing the charm is this delicious appeal to golfers: Just a half-hour drive south of downtown is the Sandbelt region and some of the highest ranked golf courses in Australia – and the world.

“Australia has the ability to become a golfing destination on par with Ireland,” PerryGolf president and co-founder Gordon Dalgleish said following a recent trip Down Under.

Of course any mention of Sandbelt golf starts with the wonderful layouts at the oldest club in Australia, Royal Melbourne’s East and West. The West course, designed by the legendary Alister MacKenzie is routinely Top 10 in the World and No. 1 in Australia while the East course is Top 100 in the World as well. Royal Melbourne played host to the Presidents Cup in 1998 and welcomes the matches back in 2019. 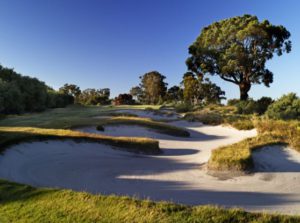 Just down the road is Kingston Heath, designed by Australian pro Des Soutar in 1925 with  an assist from MacKenzie, who suggested the bunkering. The course entertained the World Cup of Golf in 2016 and received glowing reviews from the world’s elite professionals for its conditioning and playability. Metropolitan Golf Club might be less well known on a global scale, yet it features bunkers carved into the edges of the greens, a feature unique to the region. Beware the slick but smooth undulating bentgrass putting surfaces.

Golfers interested in onsite lodging coupled with a world class championship challenge will relish the opportunity to visit Victoria Golf Club, site of the 2011 Australian Masters (won by Ian Poulter). The design is credited to William Meader, Oscar Damman and MacKenzie and noted golf writer Geoff Shackleford described their work as such: “I can’t think of a better compliment. You would never tire of playing it on a daily basis.”

Commonwealth is yet another course holding a spot in the rotation for the major men’s and women’s championships held each November and December in Australia. Beware the beautiful yet daunting dogleg left par-4, No. 16 where you’ll face a demanding drive from an elevated tee to a landing area guarded by a large water hazard. Yarra Yarra is a historic layout nearby that features four of the finest par-3s anywhere and the Woodlands Golf Club is a fine, fair test which has encompassed the spirit of the Sandbelt since 1913.

Golfers wanting to trace the steps of the Open Champion in a history-rich land loaded with exquisite golf must visit this region on the west coast of England.

Encompassing towns such as Liverpool and Southport, golfers can walk in the footsteps of every great champion to ever form a grip and swing a shaft, spanning generations from hickory to graphite.

Let us start with the three courses in the Open rota: Royal Birkdale played host to golf’s oldest championship 10 times from 1954 to 2017 and enjoys an impressive list of champions, with legends like Palmer, Watson and Trevino hoisting the Claret Jug here. The young American star Jordan Spieth added his name to the prestigious list last summer, finishing with a furious flurry to overtake fellow countryman Matt Kuchar.

Royal Lytham & St. Anne’s opened its current course in 1897 and boasts its own rich tradition. Designed originally by the pro George Lowe and later altered by the prolific Harry S. Colt, Lytham & St. Anne’s was the site of Bobby Jones’ Open victory in 1926, four years prior to his remarkable Grand Slam. The course has welcomed the Open 11 times, most recently in 2012 when Ernie Els claimed his third major title.

Returning to the Open rota in recent years was England’s second-oldest seaside course, Royal Liverpool, also known as Hoylake. In the land where The Beatles formed and catapulted to stardom, another mega star, Tiger Woods, strategically dissected the course and outdueled a quartet of competitors by two shots.

While those are the most familiar courses in the area due to their visibility during the third week of July,  there are additional options within a short car ride available to golfers visiting the Lancashire Coast.

Southport & Ainsdale, established 1906, was designed by James Braid, a five-time Open Champion, member of the Great Triumvirate and renowned architect. S&A is also a two-time Ryder Cup host (1933, 1937) and features a spectacular clubhouse and patio, delivering sweeping views of the rolling dunes and dicey heather and gorse. West Lancashire is a stern test, which has undergone many incarnations over the last 140 years. The current design is credited to C.K. Cotton and is certain to please, delight and challenge as golfers battle the brisk breezes and swift rolling terrain. Any listing of the area’s finest would be incomplete without Formby, established in 1884 and widely considered one of British Isles’ finest links. Birkdale, Liverpool and Lytham are all within a 45-minute drive of Formby, which stretches to 7,028 yard from the back tees and offers few, if any, flat lies in the fairways.

Lancashire’s neighbors to the north would surely argue, over a friendly pint no doubt, that their area is steeped in history and tradition equal to anywhere in the world. Scotland is, after all, the Home of Golf and the first ever Open Championship was played in Ayrshire in 1860.

The county in southwest Scotland is located on the Firth of Clyde and is the home to an array of links, spanning more than 150 years of design philosophies and alterations, spiked with the ever present and often gusty breezes.

Royal Troon is known for the infamous Postage Stamp green, which turns the 123-yard par-3 No. 12 into a threat more menacing than the yardage might suggest. The hole is just one piece of the puzzle that forms the inward nine, where many a player has watched the Claret Jug slip out of his dreams and vanish into the ether above South Bay. 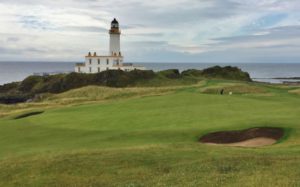 Trump Turnberry Resort (Ailsa) checked in at No. 22 in the world in the most recent Golf Digest world rankings after undergoing a massive renovation engineered by architect Martin Ebert. The course re-opened in June 2016 and features significant changes since the 2009 Open Championship when American legend Tom Watson, 59 years old at the time, lost his bid for a sixth Claret Jug to Stewart Cink in heartbreaking fashion.

A regular site of final Open qualifying, Gailes Links showcases the genius of architect Willie Park Jr. because he designed it in 1903 and other than the addition of a handful of new back tees, the course remains intact is relevant, challenging and playable. “One of the world’s truly great tests of links golf,” is how former Masters and Open Champion Sandy Lyle described the course.

Tucked between the railway and the sea, Western Gailes features seven holes to the north of the clubhouse and 11 holes to the south, with no hole spared from the howling winds ripping across off the Firth of Clyde. From Vardon to Sarazen to Watson to the best of the current era, the appreciation for this links runs deep among pros and amateurs alike. Prestwick is where the Open Championship began in 1860, beginning a glorious run for golf’s longest-running competition. Located a half-hour from Glasgow, the course measures more than 6,900 yards at par-71 from the championship tees and is a must-play for golf history buffs.

In the heart of the Ayrshire Golf Coast is Dundonald Links, familiar to some as host of the Scottish Open and Ladies Scottish Open in recent years. Designed by Kyle Phillips, this new member of this golf-rich region is a worthy addition, enhancing the overall portfolio and giving visitors yet another option to tackle during their trips here.