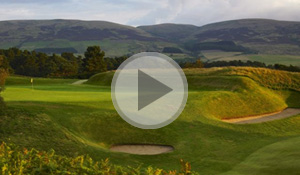 The great James Braid won five Open Championships before he designed the King’s Course at Gleneagles which opened in 1919.  Of the more than 200 courses he would go on to design, the King’s is considered to be Braid’s parkland masterpiece. You’ll find links-style pot bunkers, heather and gorse combined with inland characteristics like trees and forests, a generally slower surface;  plus numerous elevation changes several of them considerable.