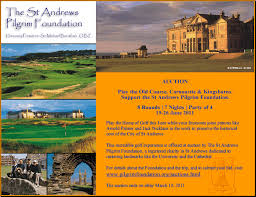 For the 6th consecutive year, PerryGolf was a key contributor and supporter of the St Andrews Pilgrim Foundation fundraiser.  END_OF_DOCUMENT_TOKEN_TO_BE_REPLACED

Colin Montgomerie was recently honored as the Coach of the Year at the recent BBC Sports Personality Awards. Although he wasn’t technically a coach, he was awarded on the basis of getting the most out of his team.  I don’t think anyone can disagree with this.  Click here for more information.

By Gary Sheppard.  Gary has been with PerryGolf for over 4 years and is one of our Golf Travel Specialists.

Colin Montgomerie guided Europe to another victory, this time in the Royal Trophy, which is an event played against some of the best players from Asia.  In a similar format to the Ryder Cup, the Asian team led 6-2 going into the final day’s singles with 8.5 points required for victory.  Monty’s team, having been outplayed over the first two days, rallied to win the singles 7-1 and take the overall victory 9-7.

Monty sympathised with the heartbroken Asian captain, Joe Ozaki, comparing it to the similar comeback his team were on the wrong end of at Brookline in 1999, saying “That ranks as easily my worst Ryder Cup experience, because quite apart from the bad feeling and the crowd problems there, it was a horrible feeling to see such a big lead slip away, so I know how the Asian players will be feeling at the moment, but the important thing is how they react to this defeat. We lost the first six matches, all by big margins, so that was very tough to take.”

Despite many of Europe’s best players not taking part, big names such as Henrik Stenson, Matteo Manassero and Peter Hanson opted out, and with the drama that unfolded capturing an enthralled audience, the event is sure to grow and grow, especially with the quality of golfers coming from Asia improving year after year.

I was delighted to learn today that Jose Maria Olazabal has been confirmed as Colin Montgomerie’s successor to be the European Ryder Cup Captain.  He was always the favorite to take over from Monty – but it was never guaranteed – and there was even speculation that he would prefer to concentrate on his own golf and try to qualify for the matches in 2012.

Having competed in 7 matches over a 19 year career, Jose Maria is a Ryder Cup legend.  He lies 5th in the European standings for most matches won and most points won respectively.  Click here for more details.

By Gary Sheppard.  Gary has been with PerryGolf for over 4 years and is one of our Golf Travel Specialists.