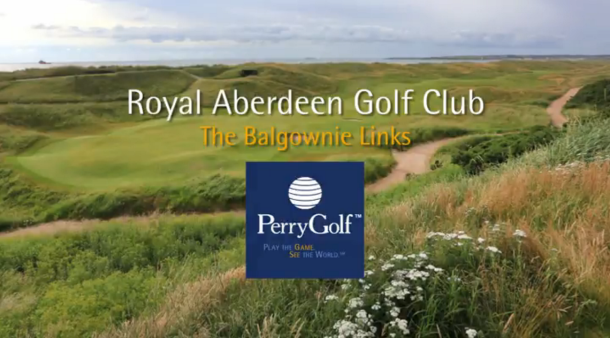 Located in Aberdeen, Scotland eighty one miles north of St Andrews, Royal Aberdeen Golf Club was founded in 1780 as the Society of Golfers at Aberdeen. It became the Aberdeen Golf Club in 1815. The club’s ‘Royal’ designation was granted by Edward VII in 1903.

Royal Aberdeen was originally designed by brothers Archie and Robert Simpson and later re-bunkered and lengthened by James Braid. It is the sixth oldest club in the world…and accredited in 1783 as home to the “five minute rule to find your ball.”

This is a demanding test of Scottish links golf which runs along the North Sea shore. The fairways tumble and pitch, and elevations change dramatically. There is no finer outward nine in the game.

The first plays from a tee box beside the clubhouse directly toward the North Sea. The next eight play north between towering dunes on the right and a steep slope on the left that plateaus into what used to be farmland but is now the inward nine. The approach to nine plays steadily up the side of the dunes easily adding a club if not two. The inward nine runs on high ground through yellow whins and purple heather, providing a unique contrast to the sand dunes which are dominant in the outward holes…which offer more of a battle with the elements.

Host of the 2014 Scottish Open, this 6,415 yard par 70 layout – along with Cruden Bay and Trump International Golf Links – is where you want to spend a couple days either coming or going to the Scottish Highlands.

Do you want to play Royal Aberdeen Golf Club? View the PerryGolf Scotland Package below!